Primary resources in Coronavirus times or why gender equality can help save the planet. 2020 Mixed media ,copper,gold on canvas 38x108 cm 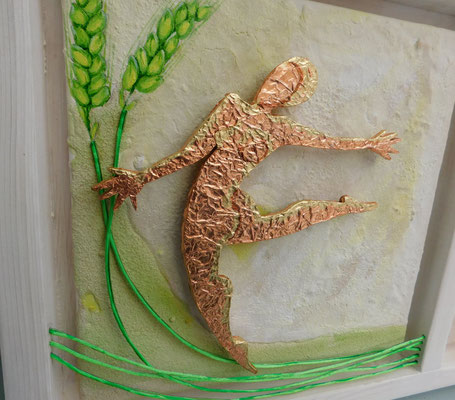 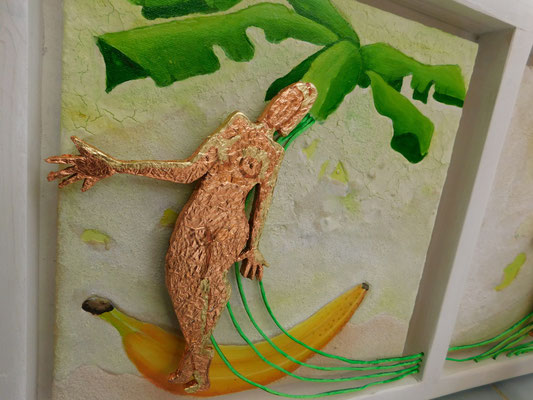 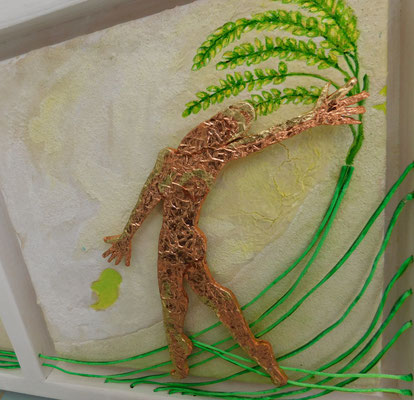 Flowering life in your hands 2018 Mixed media on canvas 74x44cm 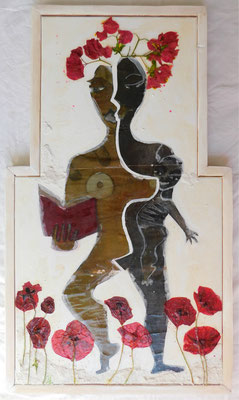 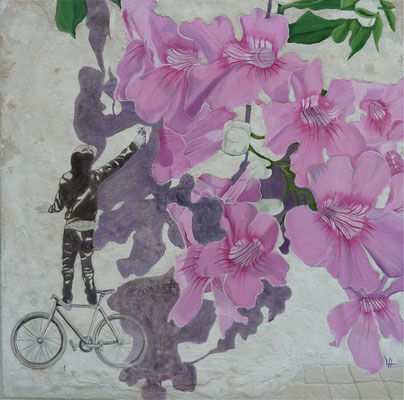 The name Podranea is an anagram of Pandorea, a closely related Australian genus, in which Podranea was first classified. Pandora means all-gifted. She was the first woman of Greek mythology and was given the box that contained all man's ills. When she opened it, they all flew out. 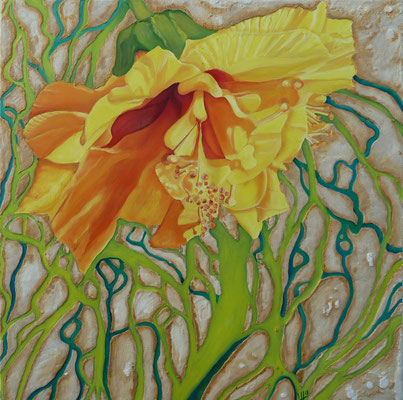 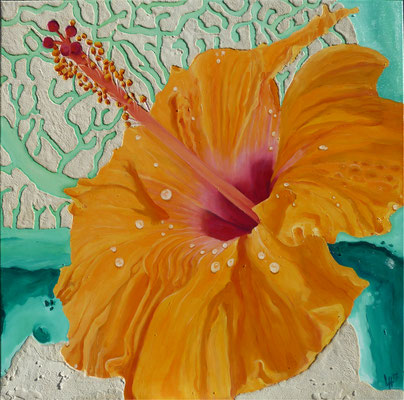 Hibiscus has been called “Flower-of-an-hour”. When someone gives you a hibiscus, it can also suggest “Seize the opportunity” which of course is represented by the hibiscus’ full bloom which can end anytime.

Hibiscus is commonly associated with Hawaii, the yellow variety being its official state flower. A red hibiscus behind a girl’s right ear meant “ I have a lover” and if its behind her left ear, it meant “ I seek a lover”. A girl with hibiscus on both her left and right ear wants to convey the message that she has a lover but is seeking for another lover. In Hindu worship, hibiscus is used as an offering to their goddess while in Singapore it is regarded as a flower of celebration. 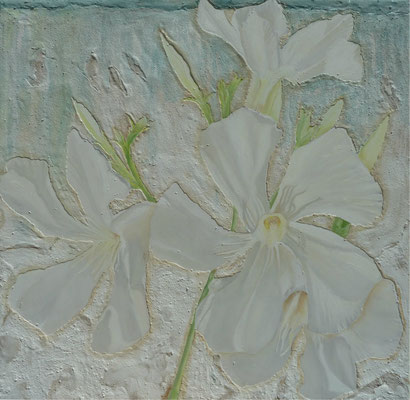 There are differing interpretations involving the origins of the taxonomic term Nerium Oleander, first assigned by Linnaeus in 1753. The genus name Nerium is the Latinized form of the Ancient Greek name for the plant Nerion (νἠριον), which is in turn derived from the Greek for water, 'neros' (νἠρος), because of the plants' natural habitat along rivers and streams In the Narni area of Umbria, in the Italian countryside, the farmers and shepherds still use medicinal plants. N. oleander leaves are ground and mixed with honey to form a poultice and then applied topically to treat scabies.  In certain regions of Morocco, phytotherapy represents an integral part of health care. Diabetes mellitus, hypertension, and cardiac disorders are conditions treated with oleander. 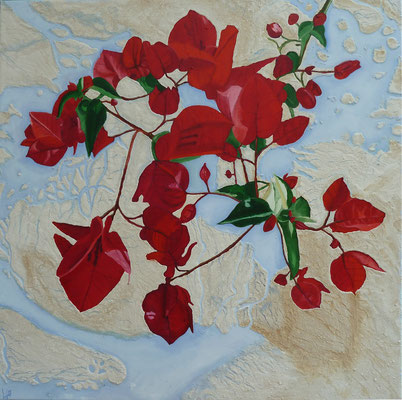 The bougainvillea, for example, was named after French admiral, Louis de Bougainvillea, who discovered the vine growing in Brazil during a long journey to the Pacific Ocean in 1768.The rapid growth of bougainvillea and the speed of its climb towards the sun caused the elves of Ta'Ardenai to use bougainvillea flowers as a symbol of playfulness. 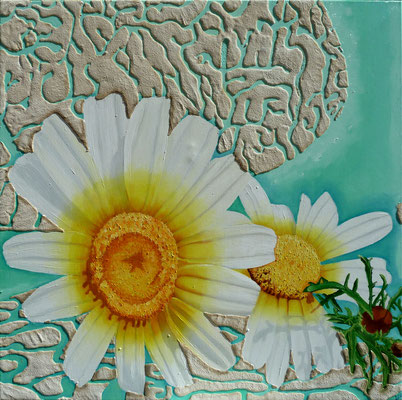 This flower has his native in the mediterranean.

The plant is rich in minerals and vitamins with potassium concentrations at 610 mg/100 g and carotene at 3.4 g/100 g in edible portions.

In addition, the plant contains various antioxidants (in stem, leaf,and root tissues) that have potential long-term benefits for human health

It was once regarded as an important medicinal plant in Japan, where it was chief ingredients on a formula for promoting longevity, returning grey hair on its original colour and replacing lost teeth.

The plant’s greens are used in many Asian cuisines.Especially for Chop Suey.

A tea made of its blossoms reminds on Jasmine tea. 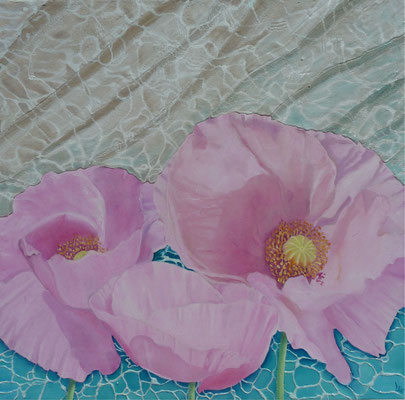 In Greek mythology, Demeter created the poppy so she could sleep. This was after the loss of her daughter, Persephone.

The twin brothers Hypnos and Thanatos were depicted with a crown of poppies.

Because Hypnos was the god of sleep and Thanatos was god of death, the Greeks were obviously aware that endless sleep meant death.

In Greco-Roman myths, poppies were used as offerings to the dead.

Throughout history, these flowers have been used as emblems on tombstones to represent eternal sleep.

The pink colour is tied to imagination, luxury, and success. 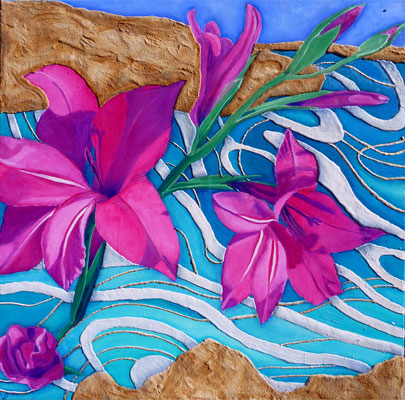 The name `Gladiolus'' comes from the Latin ``gladius'' and its sword shaped leaves.

The gladiolus symbolised the Roman gladiators.

The stem base of the gladiolus were made into a poultice for thorns and splinters and used for it’s healing properties. 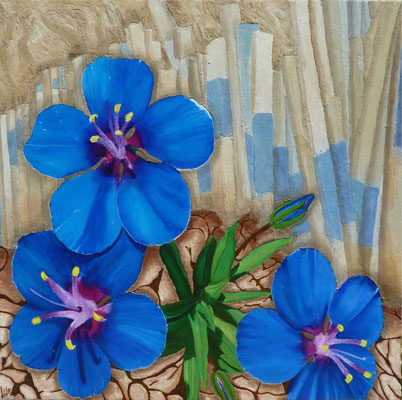 Mystery surrounds one of our prettiest arable weeds – in northern Europe it’s brick red, while in Spain it’s blue.

I like its alternative name, poor man’s weather glass, from its habit of closing its flowers in dull weather.

It’s also, of course, indelibly linked to one of the most famous characters in English literature, in Baroness Orczy’s novel The Scarlet Pimpernel, and to one of its most famous bits of doggerel:

Is he in heaven or is he in hell? That damned elusive Pimpernel

The Spanish researchers mapped red and blue plants across Europe and found that by far the best predictor of flower colour was hours of sunshine.

The sunnier it is, the more likely are blue flowers, so you can see right away why they’re red in Northern Europe and blue in southern Spain.

When they grew both forms under experimental conditions, the blue form also tended to do best when it was dry or sunny.

It turns out that the usual name for A. arvensis in Spain is jabonera (“soap herb”), referring to its toxic saponin content 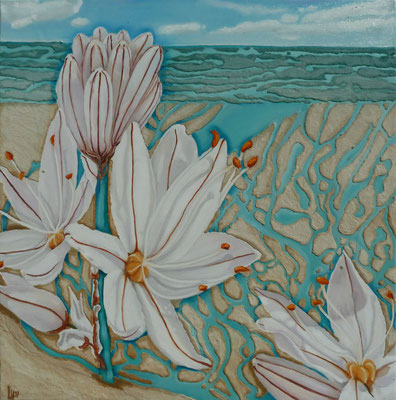 In Greek legend the asphodel is one of the most famous of the plants connected with the dead and the underworld. Homer describes it as covering the great meadow (ἀσφόδελος λειμών), the haunt of the dead. It was planted on graves, and is often connected with Persephone, who appears crowned with a garland of asphodels. Its general connection with death is due no doubt to the greyish colour of its leaves and its yellowish flowers, which suggest the gloom of the underworld and the pallor of death. The roots were eaten by the poorer Greeks; hence such food was thought good enough for the shades. The asphodel was also supposed to be a remedy for poisonous snake-bites and a specific against sorcery; it was fatal to mice, but preserved pigs from disease. The Libyan nomads made their huts of asphodel stalks. 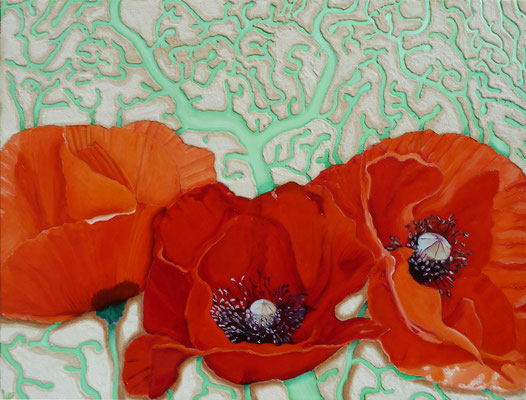 Poppies have long been used as a symbol of sleep, peace, and death: Sleep because the opium extracted from them is a sedative, and death because of the common blood-red color of the red poppy in particular. In Greek and Roman myths, poppies were used as offerings to the dead.[5] Poppies used as emblems on tombstones symbolize eternal sleep. This symbolism was evoked in the children's novel The Wonderful Wizard of Oz, in which a magical poppy field threatened to make the protagonists sleep forever.

A second interpretation of poppies in Classical mythology is that the bright scarlet color signifies a promise of resurrection after death. 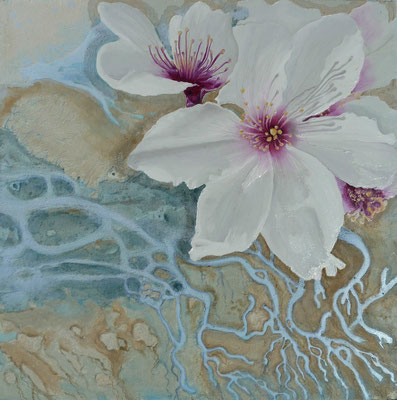 To the ancient Greeks, the almond tree and its blossoms were associated with a legend about Demophon and Phyllis. They had arranged to be married, but before the ceremony could take place, Demophon was recalled to Athens for the funeral of his father. He promised to return, but he miscalculated and arrived three months later to find that Phyllis had hanged herself. As is often the case in Greek myths, the gods were so moved by her love, that they transformed her into the almond tree. Demophon sacrificed to the almond tree, and in response, the tree blossomed. 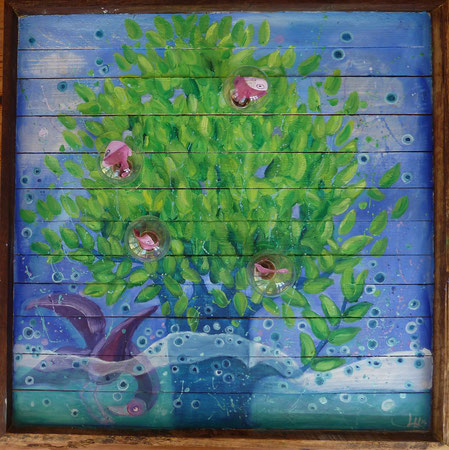 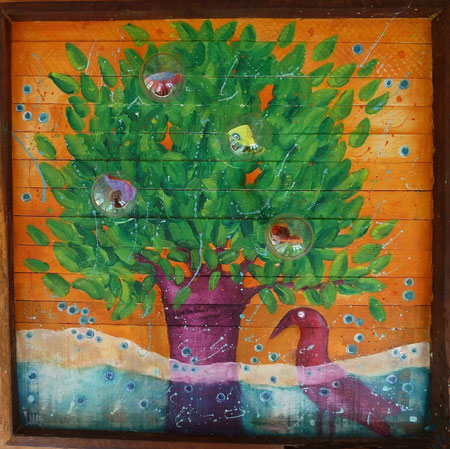 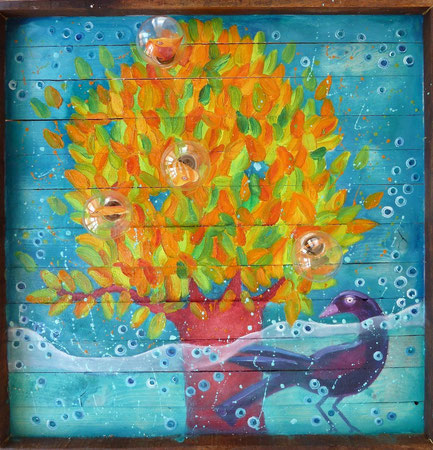 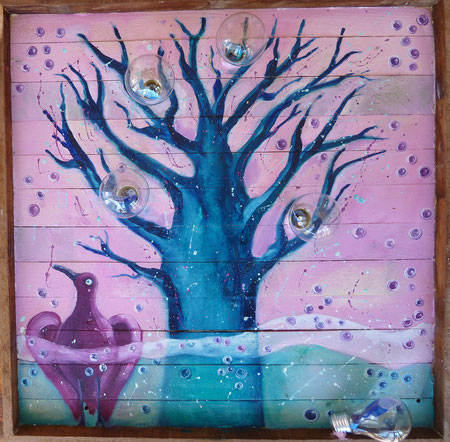 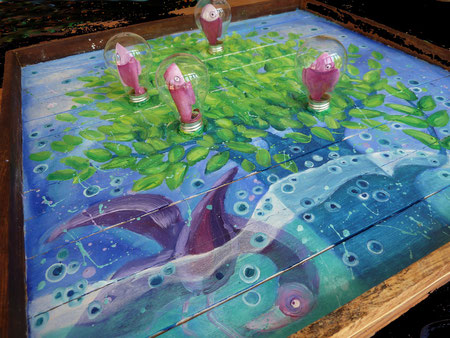 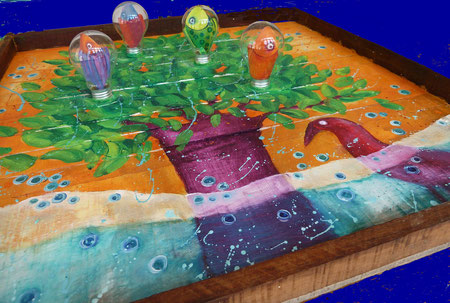 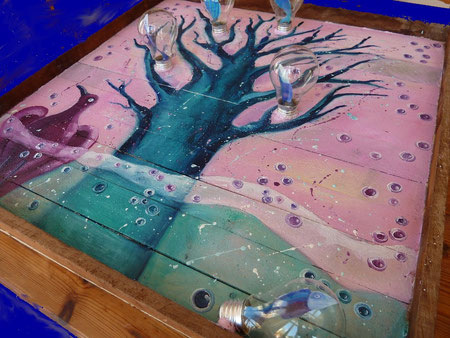 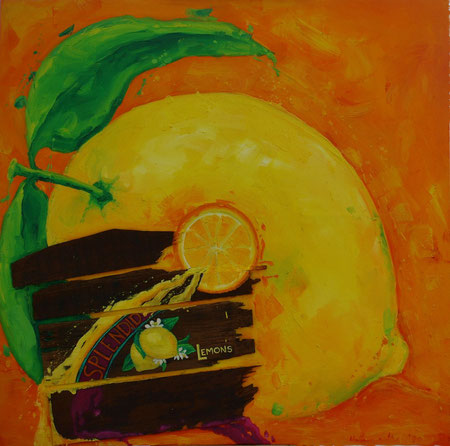 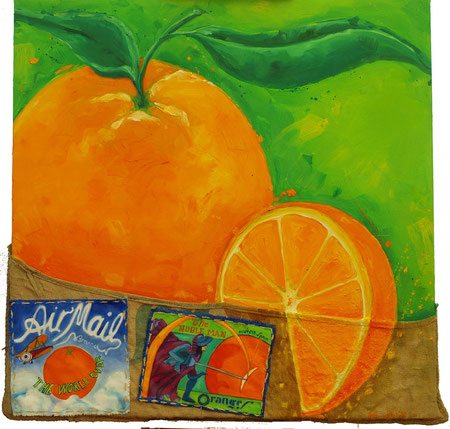 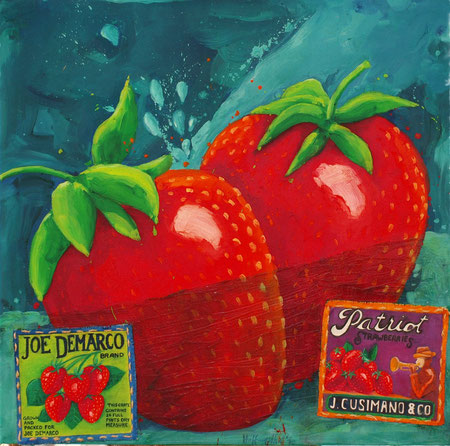 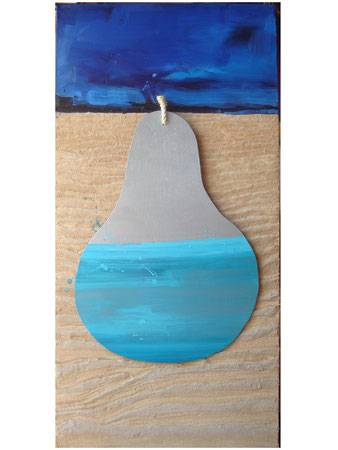 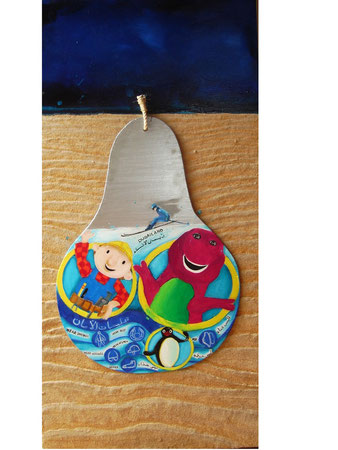